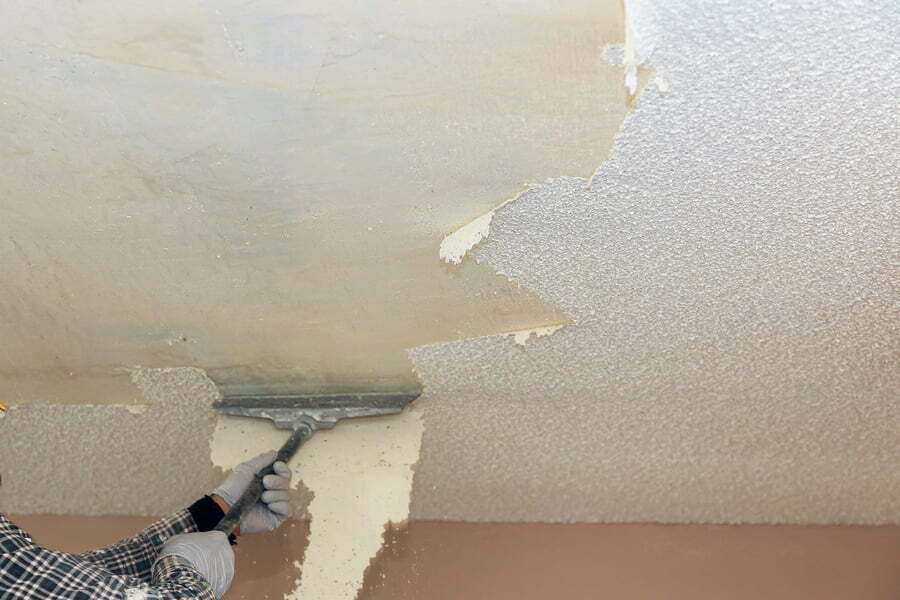 Before starting, an important safety issue must be discussed.  If your home was built before 1973, you have to consider the possibility of asbestos in your ceilings, since it used to be very popular before they banned its use in 1972.  Asbestos can cause long-term lung problems, so it's important to know for sure if you have it or not before disturbing the ceiling.  If you aren't certain, you need have the ceiling tested for asbestos, and if it is found, will necessitate specialized removal from a team that is specially trained and equipped to safely abate asbestos so that the asbestos isn't released into the air.  If your building was built after 1973 or you are certain you don't have any asbestos, the work can begin to remove your popcorn ceiling.

First, you will want to prepare for the potential mess that falls from the ceiling during popcorn removal by making sure that all furniture and surfaces are covered with plastic or drop cloths. That includes anything that will come in contact with the material from your ceiling, including countertops, furniture, curtains, electronics, and anything else that you can think of that you don't want covered in dust.

Second, you should to pay attention to protecting the rest of the building from the dust that is created when removing popcorn ceilings. Besides using the protective covers and drop cloths used to cover everything in the room where you're working, you ought to turn off your HVAC system and make sure all the vents are covered to prevent dust from entering the vents and being spread through the entire building, instead of staying in the rooms where all the work is being done.

After you've got all of your protective measures are in place for the property, you will need personal protective equipment, such as a mask and goggles, overalls or long pants, and a long-sleeved shirt, since all the work is performed overhead and all the mess drops down on you while you're working.

Popcorn ceiling removal can create a big mess and is very tiring, since all the work is performed over your head.  Remember that you need to keep everything covered the whole time the popcorn ceiling is being removed, so if the project takes multiple days, the room isn’t really usable until the job is finished.  Hiring a professional drywall contractor to do it is often the better way to go, since they are experienced at minimizing the mess and they work quickly since they are used to doing this kind of work.

El Paso Drywall Contractors is one of the best popcorn ceiling removal companies in the local El Paso area, and we’ve got a bunch of happy customers enjoying their new smooth, modern ceilings we gave them with after we removed their popcorn ceilings.  If you're ready to get your projects started, give us a call today!